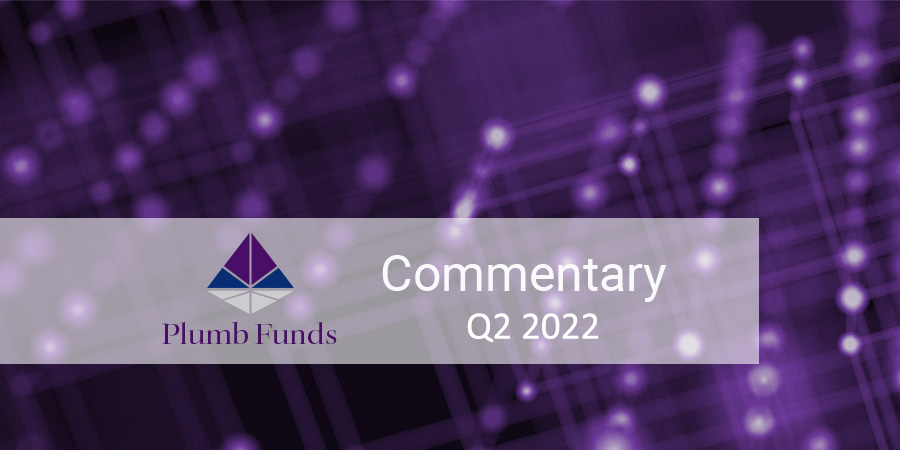 After a year of characterizing our rising inflation rates as “transitory” the Administration and the Federal Reserve (the Fed) indicated that their number one domestic priority was to reduce inflation towards its long-term goal of 2%. The cost of commodities like oil, had already gone up significantly when the conflict in Europe accelerated price rises and fears of both food and energy availability. Taken together, these events and the anxiety they have caused fueled one of the worst selloffs in both the stock and bond markets in decades. The S&P 500 stock index, which is weighted to reflect the market capitalization of its members, had its worst start a year since 1970 with a 20% decline. The NASDAQ-100 index that is heavily weighted towards the titans of technology was down over 30%, the worst showing since its inception in 1985. The bond market, reflecting rising interest rates recorded its worst performance in over forty years.

The tool that the Federal Reserve historically uses to break inflation is to increase interest rates to the point that demand declines and we find an equilibrium between suppliers and end demand. Often this results in recessions despite their hope of engineering a “soft landing.” In fact, with the technical definition of a recession including two consecutive quarters of negative economic growth, the first quarter decline in Gross National Product (GDP) could have been followed by a decline in the second quarter, according to the Atlanta Federal Reserve projections. So, we may very well be fearing an upcoming recession that is already here.

Recessions seldom look alike, and if we are in a downturn this one would be very unusual in the job market is extremely tight, job openings significantly outnumber the people looking for work and unemployment is at a multi-decade low. And though there are pockets in the economy where both consumers and businesses are financially stressed, Corporate America has an aggregate record $4 trillion in cash and households are holding $18.5 trillion in checking accounts compared to $13.3 trillion prior to the pandemic. In fact, weakness starting this cycle seems to be a result of companies reducing inventories rather than a reduction in end demand.

The anticipation of the Fed action may have already amplified the impact of rising interest rates and reduction in liquidity through their “quantitative tightening.” We are already seeing signs of a housing slowdown and commodity price peaks, including gasoline and other oil products.

Predicting short-term stock market moves has never been very successful. But as we look back at this year’s decline in 2022 that matched the 20% decline to start 1970, it might be useful to look at what happened after that decline in 1970. The market advanced over 27% in the last half of 1970 and was 62% higher eighteen months after the decline.

Current events are troubling, to say the least, but many concerns have already been reflected in both the stock and bond markets. This may not be the bottom, but we see substantial reasons to think that the economy will be resilient and that investors will be rewarded by investing in leading companies at these discounted prices.

S&P 500 Total Return Index. S&P 500 is an unmanaged index which is widely regarded as the standard for measuring large-cap U.S. stock market performance.

The Nasdaq-100 is a stock market index made up of 102 equity securities issued by 101 of the largest non-financial companies listed on the Nasdaq stock exchange. It is a modified capitalization-weighted index.

It is not possible to invest directly in an index.

Past performance does not guarantee future results.

Opinions expressed are those of the author as of June 30, 2022, and are subject to change, are not intended to be a forecast of future events, a guarantee of future results, nor investment advice.

Earnings growth is the annual rate of growth of earnings from investments.

The fund may invest in small and mid-sized companies which involve additional risks such as limited liquidity and greater volatility. The funds invest in foreign securities which involve greater volatility and political, economic and currency risks and differences in accounting methods. Because the funds may invest in ETFs, they are subject to additional risks that do not apply to conventional mutual funds,

including the risks that the market price of an ETF’s shares may trade at a discount to its net asset value (“NAV”), an active secondary trading market may not develop or be maintained, or trading may be halted by the exchange in which they trade, which may impact a fund’s ability to sell its shares. The fund may also use options and future contracts, which have the risks of unlimited losses of the underlying holdings due to unanticipated market movements and failure to correctly predict the direction of securities prices, interest rates and currency exchange rates. The investment in options is not suitable for all investors. The Plumb Balanced Fund will invest in debt securities, which typically decrease in value when interest rates rise. This risk is usually greater for longer-term debt securities.

Fund holdings are subject to change at any time and should not be considered a recommendation to buy or sell any security.

Diversification does not assure a profit nor protect against loss in a declining market. Plumb Funds are distributed by Quasar Distributors, LLC, distributor.

The Federal Reserve System is the central banking system of the United States of America. It was created on December 23, 1913, with the enactment of the Federal Reserve Act, after a series of financial panics led to the desire for central control of the monetary system in order to alleviate financial crises.

Gross domestic product (GDP) is the standard measure of the value added created through the production of goods and services in a country during a certain period. As such, it also measures the income earned from that production, or the total amount spent on final goods and services (less imports).